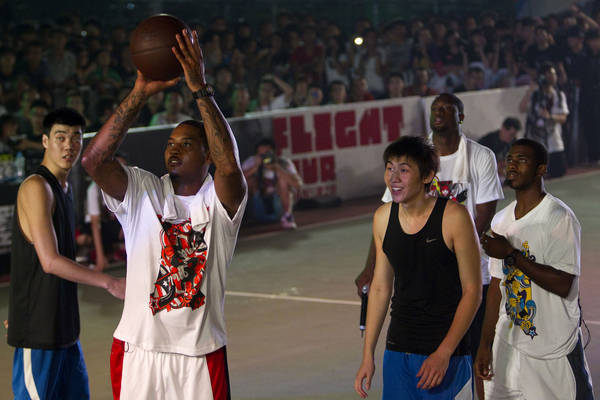 The NBA lockout, its players and the Melo League.

Who still cares about the NBA?

As a Dad and avid sports fan – I will definitely miss the NBA.  Though, we’ll never find the glory days of the 80’s with the Celtics and Lakers or the Jordan Years.  Aren’t we still waiting for the next Michael Jordan?  Kobe is the closest that will ever exist, but after Denver – can you ever really embrace him?  Here are some things that I won’t miss about the NBA.

The disagreement over the Collective Bargaining Agreement (CBA) has caused another wave of “Billionaires v Millionaires”.  I’m wondering if “Reality TV” has any availability for another 10 episode – thirty minute slot.  The NBA’s popularity and brand is second to none — behind the NFL.  We clearly see some of the damage control that the NFL avoided when the Roger Goodell started motivating the owners to work with DeMaurice Smith.  Derek Fisher, Pres. of the NBA Player Association sent a letter urging the players to stand together as the imminent cancellation of regular season games and paychecks moves —painfully closer.  David Stern – what in the world are we doing?  It’s a global league with your beloved “super” teams – the Knicks, Lakers, Celtics and Bulls and the up and coming small markets squads.  Can someone from Business Development provide the average fan a general ledger of the 8-10 teams that are losing money?  Ultimately, it’s the everyday fan that isn’t sponsored by the corporations with luxury boxes that gets the “shaft”.  That seems to be the case in most professional sporting events today.

So what have the players been up to?  Kobe is mulling an offer to play it Italy.  Other NBA players are spending their time constructively by heading back to school.  The overall talk is — NBA players heading overseas – while ultimately thumbing their noses at league and its own player association.  Can you say decertification?

And then there’s the MELO League.  The Sunday evening game at the famed Palestra was streamed on SI.com and the Team MELO played in front of 8,700 fans.  Chris Paul, Carmelo Anthony, LeBron James and Kevin Durant (alias CP3, Melo, King James, Duranchula) give you the feeling of visiting Rucker Park or an AAU tournament at the University of Pennsylvania’s campus. To play devil’s advocate – what happens when someone blows an ACL and violates their contract for participating in these pickup games?

So, what are our next steps – the owners and players can sit on their war chests for only —so long.  Do we wait for the courts to get involved or does the league dare to embarrass itself and try to use replacement players?  Commissioner Stern – it’s time to double down and canoodle with union executive Billy Hunter to save the Nov 1st tip-off date.

I say again – Who still cares about the NBA?

…and on the 162nd game of the MLB season – who says these games don’t matter.

Win, Lose or Draw – C.C. opts out at the close of the season.