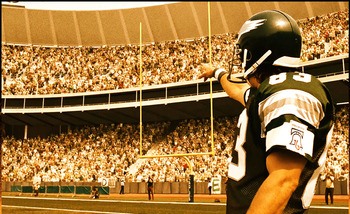 The Dream Team is DEAD!

Much can be said about so-called references to Dream Team’s and the inability to live up to the hype.  In the last year, the Miami Heat and now the Philadelphia Eagles have downplayed and discounted all the talk and quickly received a backlash of bad press and fans quickly turned on their beloved players.  So much has been written about the Heat since a certain individual decided to take his talents to South Beach.  Don’t get me wrong!  The Eagles made the necessary moves (post-lockout) to enhance their chances of winning a title:  trading Kevin Kolb for cornerback Dominique Rodgers-Cromartie, acquiring Nnamdi Asomugha and signing Michael Vick to his 100MIL deal squarely put the bulls-eye on their backs.  The 1-3 start has their division rivals and the rest of the league smelling blood in the water.  The Eagles, now enter Game 5 and finally proclaim to have a sense of urgency.  Ya think?!?!   Do you think someone on the Eagles defensive squad gave Vince Young a piece of their mind when he made the silly declaration about Philly being the “Dream Team”?

Ultimately, the Eagles will get better and are in a tough NFC East division, but have the ability to make up some of the distance lost with the dreadful start.  Unfortunately, Michael Vick will continue to be punished by opposing defenses with his style of play and won’t finish the season without another trip the injured reserve list.  You can expect the Eagles to make the playoffs, but a BIG question mark on how far they will make it before facing a defensive coordinator that has Team Vick’s number. This is similar to watching your favorite Science Fiction movie on a Samsung LED TV and expecting different special effects.  All the Best to the Eagles – let’s keep the division race interesting between you, the Boys, Skins and those NY Giants.

Oh, how do I miss the real DREAM TEAM!!!

Detroit: Great time to be a fan!