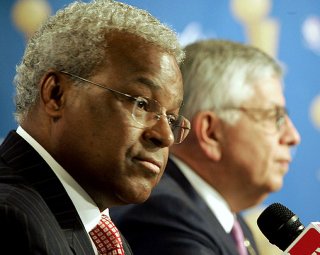 Did Bryant Gumbel really say that?

I’m not a basketball owner, executive or player, but merely a DAD that enjoys taking his children to sporting events.  Basketball is a game that I loved to play and one that has definitely gone down the tube since “The Jordan Era” ended with the Bulls in 98’.  Now, that I’ve set the table, we can get to comments about David Stern.  Being an “outsider” which is definitely the “fad” nowadays, it’s a reality for the everyday fan to state “David Stern and Billy Hunter” have made a total debacle of this lockout.

Yes, the business model might be warped, but both sides are still discussing how to split $4BIL in basketball related income.  The words used to describe David Stern were “Some Kind of Modern Plantation Overseer”. Folks, let’s get real!!!  David Stern implemented a dress code – to remove the astigmatism that plagued the league and its player’s appearance.  It’s called “business casual” and it was the CORRECT move.  How quickly do we forget when hip-hop, entourages, corn-rolls and tattoos became the “norm” in the NBA!  Are we really talking about practice?

Thank Goodness for federal mediator George Cohen!  You fixed the NFL and now please fix the NBA.  We want our XMAS day games!

It was a calculated and cross-promoting shot to revive the ratings of the “Real Sports” show.  Bravo!  It worked, and you’re a genius!  The 24/7 SPIN cycle is talking, so now you’re relevant – again – at least for the next 15 minutes.