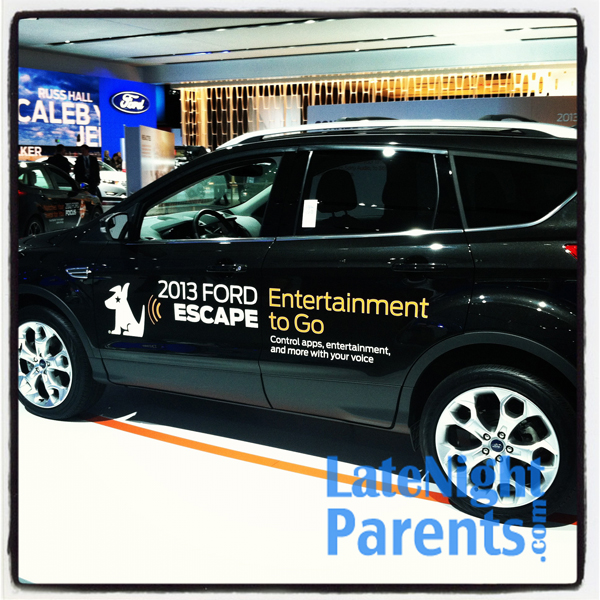 Three weeks ago I flew to Detroit for the Ford NAIAS Innovation and Design Fantasy Camp. During my three days with Ford I was able to get up close and personal with their vehicles as well as their entire design process. From idea to execution, Ford cuts not corners when it comes to making their vehicles safe, reliable, affordable and attractive.

When you’re a single mom like me finding a car that meets all of those needs really matters. With an often tight budget and no man around to check that clunk, shimmy or squeak, single moms need reliable and affordable cars. Ford is a car manufacturer that offers that to single parents.

SUVs have become extremely popular over the last few years. If you’re in the market for one the 2013 Ford Escape scored high on my list for single parents. Its all-new exterior design made me do a double take when I walked past it at NAIAS. Now streamlined instead of boxy, the new model is striking and sleek.

While its fuel economy figures have yet to be certified, Ford predicts highway fuel mileage of five mpg greater than the current model on its hybrid version. This would make its rating as high as 36 mpg since the 2012 Escape is rated at 31 mpg on the highway in hybrid form.

One of my favorite new features on the Escape is the “kick to open” liftgate. Wave your foot beneath the rear bumper and the liftgate opens or closes. How awesome is that for the single mom with her arms full of shopping bags? No more fumbling for keys while balancing on one foot with your hands full!

There’s also an optional package that includes a blind-spot warning system, rain-sensing wipers, front and rear parking sensors, a backup camera, and Ford’s Active Park Assist self-parking system. Other options include the latest version of Sync voice recognition and the MyFord Touch touch-screen interfaces, a remote starter, and a hill-start assist feature to prevent the Escape from rolling backwards.

Safety features include a BUNCH of airbags, including redesigned side airbags that automatically adjust their firmness depending on occupant size, “canopy” curtain airbags that deploy in a rollover accident, and the Escape’s first-ever driver’s knee airbag.

The next Ford vehicle that scored high on my list for single parents is the 2012 Ford Focus. With fuel efficiency of up to 36 mpg (the SFE package boasts up to 40 mpg!), the savings a single parent will get on fuel is hard to be beat. And with a base price of about $18,000, Ford makes the dream of purchasing a brand spankin’ new car a reality for a single mom like me who is on an extremely tight budget.

In addition to driver and front seat passenger airbags, every Focus comes standard with front seat-mounted side airbags as well as front and rear side curtain airbags making it a safe choice for single parents as well.

Are you the single parent of a teen? The Ford MyKey feature on the 2012 Ford Focus allows parents to limit speed and audio volume to encourage teens to drive safer and improve fuel efficiency. Each key for your Ford Focus can get its own program to limit top speed, limit the volume of the stereo, as well as a bunch of other neat features.

Bang for your buck, single moms!

Last but certainly not least on my list of top Ford vehicles for single parents is the 2013 Ford Fusion. This car is for the single parent who truly wants to ride in style. Its attention to detail, along with a striking new design and fuel-efficient engine, are what make it a great choice for single moms in the market for a midsize sedan if you can hold out until it goes on sale somewhere in the middle of 2012.

The 2013 Fusion hybrid is expected to get up to 47 mpg, and can travel at up to 62 mph on electrical power alone, making it ridonkulously fuel efficient. That means a single parent could put away the money they’d usually spend on gas for a nice family trip to Disney! Heck, you could even drive there instead of fly with the fuel efficiency of the 2013 Ford Fusion!

My favorite feature on the 2013 Fusion is a lane-keep system that uses a camera mounted in the rear-view mirror to determine if your car is weaving away from your current lane. If so, the system provides a subtle vibration in the steering wheel to alert you. Great for those mornings when you’re a single mom who has rushed out the door to drive your kids to school without your normal cup of coffee and need a little jerk back to reality to get you back into the drop-off lane.

As far as safety for your brood, there are eight standard airbags, including driver and passenger knee airbags.

So there you have it, my top three Ford vehicles for single parents. But don’t just take my word(s) for it, head out to your local Ford dealer and check them out for yourselves! And tell them Mely sent you 😉

Disclosure: Ford Motor Company paid for my travel and accommodations at the 2-day Innovation and Design Fantasy Camp event. I was not compensated in any other manner for my time. My opinions posted here are my own.

Join @Kia For The “Drive The Dream” Twitter Party!