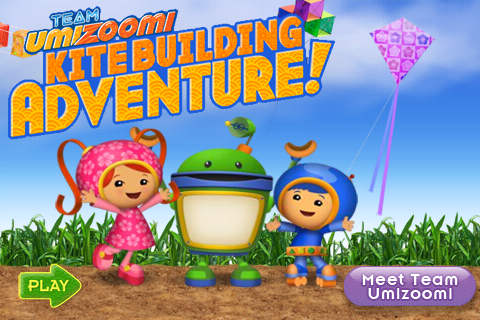 NEW YORK – March 9, 2012 – Join Milli, Geo and Bot on four sports-themed math adventures in Team Umizoomi: Umigames.  Preschoolers will learn many math skills, including counting, patterns, measurement, and more! Get in the Olympic spirit and don’t miss out on the Umi Team’s latest all new DVD. Created by Nickelodeon Home Entertainment and distributed by Paramount Home Media Distribution, Team Umizoomi: Umigames will be released on DVD for the suggested retail price of $14.99.

adventure missions with an interactive math curriculum designed to help kids develop self-confidence in their math abilities and appreciate the many ways in which math shapes their world.  The Umi Team is not complete without their Umi Friends (home viewers), who help the team along the way while practicing various math skills.  Set to a soundtrack of preschool-friendly pop songs, the series is designed to build upon preschoolers’ conceptual understanding of math as they are exposed to core mathematical concepts like numbers, counting, computations, measurement, patterns and shapes.Team Umizoomi: Umigames Episode Synopses:

Umi Sport Games
Team Umizoomi is playing in the biggest sports event around: the Umi Games! To win the Super Sports Trophy, Milli, Geo and Bot must defeat the robotic athletes.

Crazy Skates
Bot decides to give roller-skating a try but when he puts on a pair of “crazy skates” by accident, he starts rolling out-of-control all cross Umi City. Milli and Geo must rescue their runaway robot pal.

Carnival
Jake calls in from his class trip at the Umi City Carnival.  The class is having a great time on all the rides but Jake lost his favorite stuffed animal Bunny!  Team Umizoomi takes the Umicar to the carnival to help Jake rescue his stuffed animal.