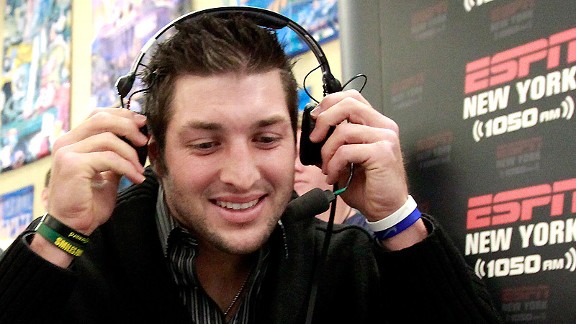 Tim Tebow has been traded to the Jets.  The team said Wednesday it has acquired the polarizing quarterback from the Broncos. Denver general manager Brian Xanders says the Broncos will receive fourth- and sixth-round draft picks, while New York gets a seventh-rounder — all in 2012.  The Jets also will reimburse the Broncos for half of the $5 million salary advance the Broncos paid under Tebow’s contract.

Denver started shopping Tebow after signing Peyton Manning.  Tebow is expected to complement starter Mark Sanchez, who received a $40.5 million contract extension, with $20.5 million guaranteed, earlier this month.  Tim is slated to be the backup QB and used in other packages.  Those other packages primarily refer to the Wildcat formation that Jets head coach Rex Ryan and offensive coordinator Tony Sparano both like to employ, and General Manager Mike Tannenbaum noted that both Ryan and Sparano learned first hand last year that Tebow can beat a team with his legs.

Tebow led the Broncos to the playoffs last season – along the way beating Sanchez and the Jets, who missed the postseason. But Denver executive John Elway believed Manning gave the team a better chance at winning a championship now.

IN THE ZONE TAKEAWAY:  First and foremost – the NFL is a $9BIL business.  This is a business move and an attempt for the Jets to sell – PSL’s / jersey sales / back pages on print and online media.  This is from a life-long JETS fan —Can #TEBOW become Brad Smith “WILDCAT PACKAGE” from a few years ago?  I hope Coach Rex Ryan called to comfort Mark Sanchez and change his  bib and booties.

What are your thoughts?  Good or bad move and WHY?

THE GAME OF LIFE zAPPed