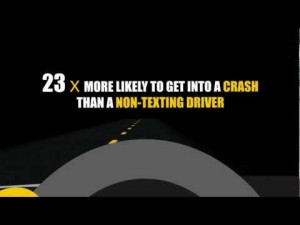 Earlier this year, the Golden Globe winning series “Glee”  made headlines when a pivotal cliffhanger episode ended with a shocking and catastrophic crash due to texting and driving. Quinn Fabray (Dianna Agron) was driving to her friends’ (Rachel and Finn, played by Lea Michele and Cory Monteith) wedding when a she received a text. She took her eyes off the road to read it and to type the words “On My Way” for a matter of seconds, but in her distraction she swerved out of her lane and was hit in a tragic accident by an oncoming vehicle. It was months before the audience and “Glee’s” millions of young adult viewers would know the fate of her character, but the message was clear: texting and driving can have horrific consequences.

The new television and digital PSAs employ this powerful scene to emphasize that five seconds is the average time your eyes are off the road while texting and driving – when driving at 55 miles per hour, that is enough time to cover the length of a football field. The PSAs direct young adult drivers to the Texting and Driving Prevention campaign web site, StopTextsStopWrecks.org, where teens and young adults can find facts about the impact of texting while driving and tips for how to curb the behavior.

The National Highway Traffic Safety Administration (NHTSA) reports that in 2010, more than 3,000 people were killed and an additional 416,000 were injured due to distracted driving, which includes texting while driving. The “Glee” PSAs are part of NHSTA, the State Attorneys Generaland Consumer Protection Agencies and the Ad Council’s national Texting and Driving Prevention PSA campaign. Launched in October 2011, this campaign is designed to curb the behavior of young adults who text while driving, address the compulsion of this behavior and demonstrate to overconfident young adult drivers that it is not safe to text while driving.

“Texting and driving is an epidemic on America’s roadways, but these crashes are preventable. Distracted driving does not just happen, it’s a choice,” said U.S. Transportation Secretary Ray LaHood. “The first line of defense must be personal responsibility by all drivers to put theirwireless devices away and keep their focus on the road, which is why we are working closely with our partners to build public awareness around this important safety issue.”

Stop the Texts. Stop the Wrecks

Walk to End Alzheimer’s is Sunday!