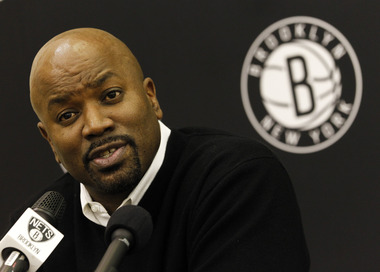 If I were the Brooklyn Nets GM – I would be very concerned!

management relieved its Head Coach Avery Johnson of his duties.  All questions shifted to what big time coach will come in to lead the Brooklyn Nets.  While I won’t spend today debating on whether Phil Jackson is willing to come to Brooklyn, NY.  My feelings are just as splashy selection of John Calipari to return for all it’s glory.  My thoughts today focus on the message that was delivered to/by General Manager Billy King.  During the press conference, King had his Brian Cashman moment – it’s when your personnel executive identifies himself as an employee that advises and makes recommendations to ownership.

This past summer, there was more than $300MM in guaranteed contracts to that King advised owner Mikhail Prokhorov has doled out.  King is very crafty and knows that he’s on the clock with the trade deadline less than 50 days away. His focus will be ridding himself of some of these bloated contracts.  Ultimately, King has to reach out to the elite coaches knowing that if Phil Jackson signs on – then it marginalizes his power in the personnel procurement duties.

Billy King needs to go ALL-IN and resurrect with his $100MM All-Star systematic point guard Derron Williams.  First, Jerry Sloan and now Avery Johnson – Derron’s reputation and stock has clearly taken a hit.  King should hope for the best with P.J. Carlesimo or that caliber of coach so that he doesn’t have to cede any power to one of these mega-coaches.