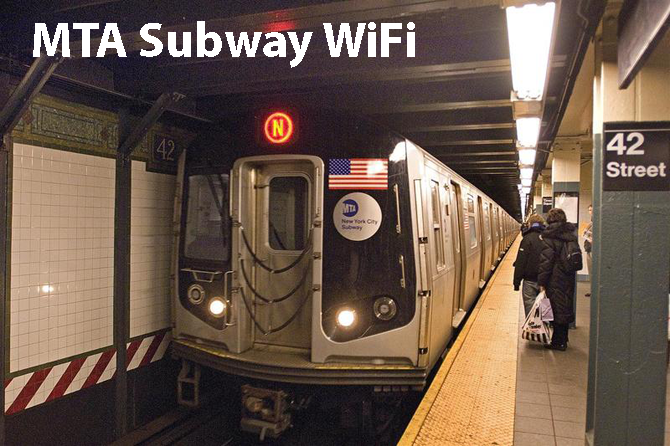 NEW YORK – April 25, 2013 – Transit Wireless and the Metropolitan Transportation Authority (MTA) today announced a significant milestone in the multi-year project to build a state of the art wireless network in the New York City subway system. Thirty new subway stations in mid-town Manhattan, including Times Square, Rockefeller Center, Lincoln Center and Columbus Circle are now online, in addition to the initial six in Chelsea, which went online in September 2011.

MTA officials were joined by executives from Transit Wireless, AT&T, T-Mobile USA and Boingo Wireless to demonstrate the service at the Times Square Station.

In addition, representatives from Sprint and Verizon Wireless were also on hand to announce that both carriers are finalizing agreements to participate in the network, meaning that all four major carriers are expected to provide cell phone and data connectivity to their customers in New York’s underground subway stations.

“For the past three years, the MTA has been on a clearly defined mission to bring our mass transit system into the 21st century with upgrades to the station environment through several ambitious new-technology communications projects like this one, aimed at improving the travel experiences of our customers while offering another level of security,” said MTA Interim Executive Director Thomas F. Prendergast.”

“The New York City subway system is the most heavily trafficked system in the world and now riders have wireless service. We have been working closely with AT&T, T-Mobile USA and Boingo to bring wireless technology into one of the oldest and historic public transportation systems in the world and we’re thrilled to begin that work with Sprint and Verizon,” said William A. Bayne Jr., CEO of Transit Wireless, “This network benefits not only riders, but city workers and first responders, and it will be the backbone for future technology and safety improvements to the city’s subway stations.”

Public Safety Benefits
While the network allows users to make and receive cell phone calls, send text messages, stream music, play online mobile games and more, all from underground subway station, it also enables important services that improve security such as E911 that allow dispatchers to know when a call is being placed from an underground platform and the forthcoming Help Point Intercom system, which will help riders get basic travel information or get help in an emergency with the push of a button, right on the platform.

“This goes beyond providing cell service underground, it brings our customers a new level of security – with the ability to dial 911 in an emergency,” said Acting MTA Chairman Fernando Ferrer. “Customers now know that when they see something, they can now say something using their device to call 911.”

Leading Wireless Providers Continue Partnership
Under agreements with the MTA and Transit Wireless, AT&T and T-Mobile USA customers can now use their cell phones to make and receive calls as well as use wireless data in more underground subway stations. Service should be available for Sprint and Verizon customers later this year.

“Bringing wireless to these busy subway platforms helps AT&T deliver on its commitment to provide our customers with the fastest and most reliable wireless service in New York City, including 4G LTE, whether above or below ground, at home, at work or in between,” said Tom DeVito, AT&T’s vice president and general manager for New York and New Jersey. “This initiative will also help spur transit innovation, which is one of the reasons AT&T is working with the MTA and NYU Poly on the AppQuest Challenge to develop the next generation of transit apps to improve the experience of every commuter.”

“Through this project, T-Mobile is extending our blazing fast nationwide 4G network coverage into the New York City subway, where New Yorkers often spend a significant part of the day,” said Tom Ellefson, regional vice president, Engineering and Operations at T-Mobile USA. “Our customers have really embraced the unlimited 4G experience T-Mobile offers, and now they can keep browsing, streaming and sharing when they go underground. We expect to launch 4G LTE in New York this summer, and this project has paved the way for it to extend into the subway as well.”

“Boingo has kept commuters connected since our managed and operated services launched in 2011. We look forward to expanding our network and introducing leading brands to consumers at stations across the city,” said Zack Sterngold, vice president of business development at Boingo Wireless. “Boingo’s advertising and sponsorship platform allows commuters to connect to subway Wi-Fi free-of-charge, and enables advertisers to reach the on-the-go, connected New Yorkers with location-based messages.”

Subway riders can currently access the sponsored Wi-Fi network provided by Boingo for free by choosing the SSID: FreeWifibyHTCONE.
“In the city that never sleeps, New Yorkers love to use their mobile devices 24/7 to stay connected to friends, loved ones and business associates. So, we are thrilled to include the subway in the buildout of our new network and deliver the robust benefits of 3G and 4G LTE to commuters, public safety representatives and first responders,” said Greg O’Connor, vice president of engineering at Sprint.

“Verizon Wireless is always exploring opportunities to provide our customers with the world-class experience of the nation’s largest 4G LTE network and most reliable 3G network, no matter where they are – above ground or below. In addition to the more than $3 billion that we’ve already invested in the Verizon Wireless network regionally, we’re working with Transit Wireless to finalize an agreement to bring Verizon Wireless service to 76 stations as we support the current and next phase of this project,” said Patrick Devlin, regional president for Verizon Wireless.

The list of stations now connected is as follows (* first six were part of the initial build):

To quickly find stations that have wireless service, Transit Wireless today released a mobile-friendly website, available now at www.nycsubwaywireless.com.
Transit Wireless plans to outfit the remaining 241 underground stations within four years and has already begun work on the next 40 stations, which include Grand Central Station, 34th St. Herald Square and Bryant Park in mid-town Manhattan and stations throughout the Borough of Queens.