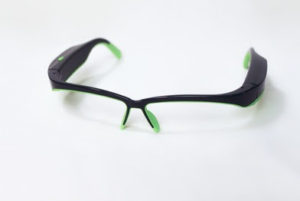 Kids’ spines are at risk of developing incorrectly due to the amount of time they now spend hunched over smartphones and tablets. Medical Wearable Solutions – a company that develops wearable technology to solve healthcare problems – has launched a Kickstarter campaign today to put a stop to the condition known as “Game Boy Disease” or “Tech Neck”.

The EyeForcer looks like a pair of glasses and prevents children from hunching over devices, which over time can cause abnormal spine development.

“Gameboy Disease is a serious condition,” says Dr. Vahid Sahiholnasab, one of Medical Wearable Solutions’ founders. “As kids continue to bend their necks over devices, they are going to experience permanent damage.”

The EyeForcer stops the “tech-induced” condition from developing by promoting proper use of electronics. The glasses, which connect to tablets or smartphones using an Android app, force children to keep their necks in proper posture in order to play their games. As soon as users start to slouch, a warning message pops up on their screens. If a child receives more than five warnings, his or her program shuts down.

Children spend more time with digital media than with any other single influence, according to the American Academy of Pediatrics (AAP), and doctors are noticing the effect on kids’ health.

In fact, Dutch spinal surgeon, Dr. Piet van Loon, coined the term “Gameboy Disease” after noticing an increase in the number of children (aged eight to 18) with back problems.

Symptoms of Gameboy Disease include neck and back pain, headaches, vision problems, and mood issues. If left untreated, it can lead to obesity, depression and spinal disc herniation.

“Technology is part of education, entertainment, and daily life, so preventing this condition is not as simple as taking away or limiting time on devices,” Dr. Sahiholnasab said. “The EyeForcer is a way to allow children to continue to use tablets and smartphones for learning and entertainment without harming their health.”

The EyeForcer debuted at the 2016 Consumer Technology Show in Las Vegas and received an overwhelming response from attending companies and the media. You can find out more about the EyeForcer by visiting its Kickstarter page here: http://kck.st/1TWolWa.

It was founded by Dr. Vahid Sahiholnasab and Ryan Sahiholnasab. Dr. Sahiholnasab has more than 12 years’ experience in internal medicine and geriatrics and holds four board certifications from the United States and Canada. He is also a clinical instructor at several Canadian universities. Ryan Sahiholnasab has an associate’s degree in sciences from Whitman College. The pre-Med courses he took at Whitman sparked an interest in preventative medicine, which led to discussions with his business partner and mentor, Dr. Sahiholnasab, about a wearable to prevent Gameboy Disease.

Gameboy Disease – also called Gameboy Back and Tech Neck – is a newly defined condition caused by the constant use of gadgets, such as smartphones, tablets and other gaming systems. Symptoms can include poor posture, neck pain, back pain, headaches, and vision problems. If left untreated, Gameboy Disease can lead to obesity, depression and spinal disc herniation. This condition affects adults, but is more dangerous for developing children. It can cause disability in early adulthood and later life and put significant pressure on healthcare systems.