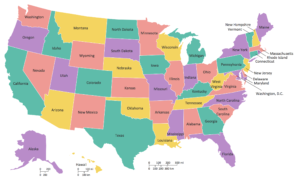 Happy National Safety Month! With three in 10 parents worrying about their children’s safety at school and one in six Americans naming terrorism as the most important U.S. problem, the personal-finance website WalletHub today released its report on 2016’s Safest States in America.

With every new headline of a school shooting, terrorist attack or natural disaster, we can’t help but worry about our safety and of those we love. Safety, after all, is a fundamental human need. And we all require it to some degree in every setting of daily life: at home, in our classrooms, on our roads, in our places of work.

“Safety” of course takes many forms, and in order to help families find the “safest” place to lay down roots, WalletHub’s analysts compared the 50 states and the District of Columbia across 25 key metrics. Our data set ranges from “number of assaults per capita” to “unemployment rate” to “estimated losses from climate disasters.”

Every state provides a different level of safety in each of these areas. Thus, when choosing a new place to lay down roots, we must carefully consider the types of security we most highly prioritize — and insulate our finances against life’s hazards in order to minimize their potential damage.