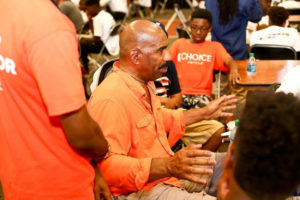 A total of 220 fatherless male youths from across the country, aged 13-18, were invited to attend a mentoring camp experience at Camp Grace in Roberta, GA hosted by the Steve Harvey Mentoring Program for Young Men. During the program, the teens live among male role models and are exposed to educational and inspirational activities aimed to introduce them to adulthood and teambuilding, instill self-respect and respect for others, teach helpful life skills and introduce problem-solving techniques to conquer obstacles and empower their futures.
Choice Hotels has supported the annual Steve Harvey Mentoring Program for Young Men since its inaugural year and is now the program’s largest donor and partner. In addition to providing complimentary hotel stays for the mothers of participants, Harvey Foundation staff and volunteers, Choice Hotels has contributed more than a quarter-million dollars to the Steve & Marjorie Harvey Foundation in less than two years.