Cyberbullying: What Is It and How to Stop It – @CallerSmart 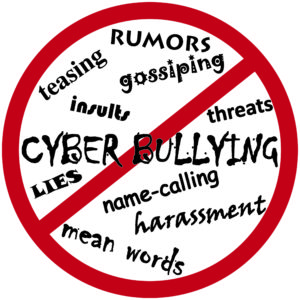 Cyberbullying affects countless teens and adolescents. A 2015 random sample study of 11-15 year olds in the Midwest found that over 34% reported being the victim of cyberbullying in their lifetime. Other studies have found that 1 in 4 teens have been cyberbullied. Victims of cyberbullying are much more likely to use alcohol and drugs, avoid school and have poor grades, experience depression and low self-esteem, and may even contemplate suicide.

Cyberbullying is a broad term and is any form of abuse repeatedly directed at a child through technology by another child. This could be online through social media, like Facebook, or via text messages on their mobile phones. Some of the forms that cyberbullying can take include:

With 92% of teens reporting going online at least once daily and 24% stating that they are “online constantly,” the amount of potential exposure to cyberbullying is high. Unlike bullying, cyberbullying can be unrelenting and seem inescapable since it is online and on phones. It can happen at anytime of day, follows pre-teens and teens home after school, and is often completely anonymous.

Cyberbullies can create fake social media profiles and download apps that provide temporary disposable numbers that allow them to send threatening text messages without the victim knowing the identity of their attacker.

In addition to the anonymity, messages, images, and videos can also be spread very quickly via social media and group text messages. Once the information has been shared it’s impossible to delete all of the occurrences of it since it can be downloaded by individuals and repeatedly uploaded.

Please see the table below for a full breakdown on cyberbullying laws in each of the 50 states.

For more information on the laws and policies in your state, the Cyberbullying Research Center provides an up-to-date PDF with descriptions of all current laws throughout the United States.

How to Stop Cyberbullying

Cyberbullying is an issue, but it’s one that can be stopped. There are many online resources to help both parents and children cope with cyberbullying and prevent it.

What teens can do…

…if they are a target of cyberbullying:

…if they see cyberbullying:

…to protect themselves from cyberbullying:

Pre-teens and teens usually won’t share what is happening to them with their parents so it’s important for parents to pay attention to any changes in their child’s attitude and talk about the effects of bullying and what to do. Even if you don’t think your child is a victim, they could be seeing cyberbullying everyday.

What parents can do…

…if your child is being cyberbullied:

…if their child is a cyberbully:

…to prevent cyberbullying from happening: