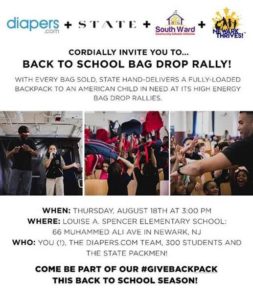 STATE Bags is not just a backpack – a #GiveBackPack. STATE Bags is a one-for-one, Brooklyn-born benefit corporation whose mission goes beyond selling cool and classic bags. STATE was created to address the immediate needs of American children living with challenging – and in some cases critical – circumstances. Founded by Jacq and Scot Tatelman in 2013, the couple created the company after watching kids carrying their necessities in trash bags at their nonprofit summer camp. For each bag sold, STATE donates a fully-stocked backpack to an American child in need at its motivational bag drop donation events. STATE offers a collection of bags – predominantly backpacks, for men, women and kids, and has partnered with a variety of influencers and brands such as Beyonce’s #BeyGOOD charitable movement, The Honest Company, American Eagle, Twitter and others in the donating thousands of bags across the country to children in need. The brand can be found nationally at retail partners including Bloomingdale’s, Barneys, Nordstrom, and Shopbop. In 2009, Scot & Jacqueline Tatelman also founded Country Roads Foundation Country Roads Foundation and its signature program, Camp POWER – a nonprofit summer camp that has served thousands of New York City kids.

WHO: STATE Bags, a buy one give one, Brooklyn-born charitable corporation that addresses

WHAT: In celebration of STATE Bags partnership with Diapers.com, STATE, in

collaboration with South Ward Community Schools Initiative and Newark Thrives, will host a

bag drop rally for hundreds of students of Louise A. Spencer Elementary School in Newark,

During the bag drop event, each student receives a STATE Bags backpack filled with back-to

school necessities, followed by an interactive and motivational party, led by STATE Bags’

WHERE: Louise A. Spencer Elementary School