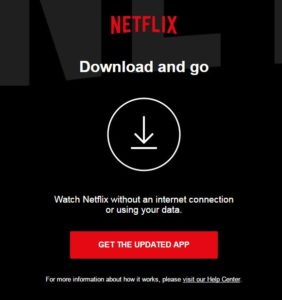 Now people can Netflix and chill — on the subway.

The entertainment company announced a new offline playback option Wednesday that allows all of its users to download shows or movies to their mobile devices so they can watch even when they’re not connected to the Internet.

“While many members enjoy watching Netflix at home, we’ve often heard they also want to continue their ‘Stranger Things’ binge while on airplanes and other places where Internet is expensive or limited,” Eddy Wu, Netflix’s director of product innovation, wrote in a blog post.

The offline option is accessible on Android and iOS devices that were updated Wednesday morning.

The new feature is included in all Netflix plans and already has a range of content available including all of Netflix’s original shows.

When users are connected to the Internet, a download button will appear next to the play button of shows that can be saved.

Users can choose two different quality options — standard, which is a lower resolution that requires less storage space and downloads faster, and higher, which takes up more space on the device and will take longer to download.

The offline library will continually be updated with more content, but already has dozens of hit shows like “Breaking Bad” and “Mad Men,” kids movies including “Kung Fu Panda 3” and “Minions” as well as award-winning films like “Boyhood,” Good Will Hunting” and “Nightcrawler.”