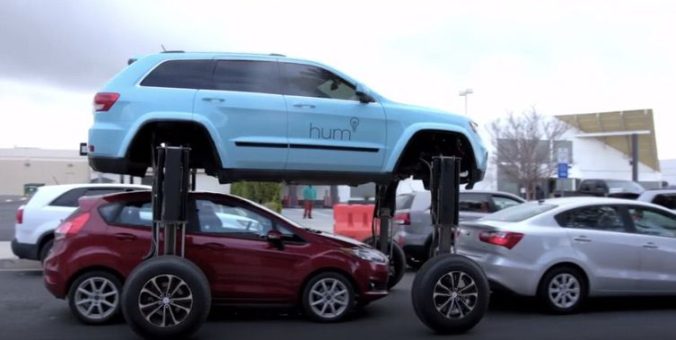 It rises, straddles the cars in front and just carries on. Sadly, it’s just for an ad.

Why didn’t Elon Musk think of this instead of digging holes under the ground to avoid traffic?  Here’s a car that simply lifts itself up, widens itself out and straddles its way over all the cars in front.  It was created by, of all highly imaginative companies, Verizon.  Or rather, it was created on its behalf as part of an ad for something called Hum.

This is an app that collects a car’s diagnostics and sends the details to your phone.  Which is riveting, of course. But not remotely as riveting as being able to soar above everyone in your way and get on with your journey.

The car is the brainchild of serial viral video-creating Slovak Michael Krivicka.  You might remember his last work of art. It was the one for the “Rings” horror movie that frightened the living daylights out of shoppers at a New York electronics store.

This ad was shot, Krivicka told us, in Lancaster, California. The company that actually built the car is A2ZFX, which is well-known for its Red Bull Mini car, as well as many other bizarre creations.

Of course, the one marginal drawback with this so-called Hum Rider is that it seems to take quite some time to put itself in position to roll over everything before it.

A marginal drawback with the ad is that the car is a fine and dramatic concept, while the app gets a mere two-and-a-half star rating in the App Store.

This article was originally published on CNET.