MEEM charging and backup device gets it right

Once in awhile you come across a new piece of equipment that seems so obvious that you wonder why it hadn’t been created sooner. The Meem automatic “Charge it up = Back it up” is one of those devices. In a single easy to install package you get a way to charge your device, securely back it up, and share data between devices. The best part is that after the initial configuration it’s all automatic.

Setup was very simple. After unboxing the unit, you simply plug the USB end into a standard charging port, connect the Meem to your smartphone or tablet, and wait for the prompt to install the application. I used a Samsung Galaxy S6 for the testing so I was taken to the Google Play Store link to download and install. After installing the application it checks the hardware for any firmware updates (mine needed it), installs the update, and initiates the initial backup. 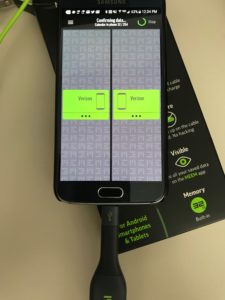 One of the first things that you do is configure a PIN code to secure the device. This is very important since all of your data is stored and encrypted locally. If you ever lose the device and it’s found by someone else they have 10 attempts to enter in the code, after that the unit is locked and inaccessible. The company provides an email address to contact them in the event that this happens. Once you’ve entered in the PIN the backup starts automatically. The backup progress is detailed along the top of the screen as your data is copied. Contacts, calendar, messages, photos, videos, music, and documents are all included. The data copies fairly quickly, but the time will vary based upon how much you have stored. Once the backup is completed you can look at the details and review everything that has been copied. 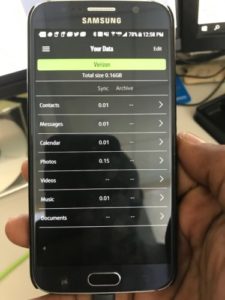 Restoring your data is very simple. You can choose to restore the entire device by dragging the device icon, or just specific folders by dragging and dropping them. Restore time is the same as the backup time.

I found the menus to be very easy to navigate and figure out, with a minor exception on the home screen. It presents as a split screen with identical information on both sides. It took a little to figure out which side represented the phone and which was the Meem, but this was minor. I would suggest that they adjust the naming conventions to something a little more obvious.
Anything else was easily answered using the built in Help menu.

All told I find this to be the perfect nightstand charging device. Every night you plug in before going to bed and you wake up with a fully charged and backed up phone. Leave the cable home so that there’s less chance of losing it and your backups.

MEEM Memory for IOS and Android. Available in 32GB/64GB/128GB
www.meemmemory.com