The NFL today announced the Super Bowl Ticket Giveaway, a new initiative this season to surprise fans across the country with an invitation to attend Super Bowl LII in Minnesota on February 4, 2018. A total of 500 free tickets will be distributed under the program as a way to give back to dedicated NFL fans and provide them with a once-in-a-lifetime experience.

NFL Commissioner ROGER GOODELL kicked off the celebration this past weekend in Minneapolis, where he and Minnesota Vikings wide receiver Stefon Diggs surprised volunteer youth football coaches and players from the Phelps Falcons with the news that their entire 8th grade team and coaches will be coming to the big game. The Phelps Falcons are a community team supported by the Phelps Activities Council, a tax-exempt 501(c)(3) that is run by volunteers who contribute more than 10,000 hours a year of their time without compensation. 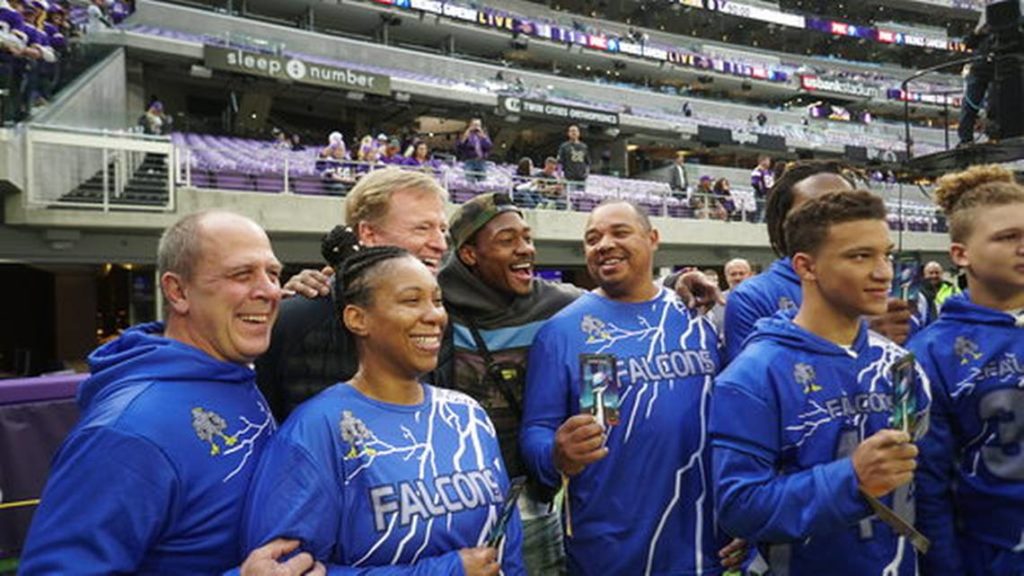 “The Super Bowl is the ultimate sports entertainment event, but we know that tickets are out of reach for most people,” said Goodell. “That is why throughout the rest of the season, we will be surprising some really special fans with tickets to the big game. It’s one of the many ways we want to thank our fans for their love and support of our teams and the game, and also recognize individuals who have gone above and beyond in our communities.”

This special initiative aims to recognize NFL fans whose passion, love, and commitment to the game enables progress both on- and off-the-field. For example, some of the free Super Bowl tickets will be given to fans identified by clubs as exemplifying the heart of their team spirit. Others will go to outstanding youth football coaches and community heroes.

Beginning this week and continuing throughout the season, fans will be surprised during tailgates, at stadiums, and even inside their own homes. Because no one is in a greater position to know fans personally than teams and players, more than half of the tickets – 256 of the 500 – will be given out by NFL clubs, with an additional 64 being distributed by nominees of the Walter Payton NFL Man of the Year Award presented by Nationwide, along support from their teams.

The remainder of the 500 tickets – 180 – will be distributed by the NFL at league events such as fan forums, youth football clinics, and through social media and other channels. The league will also partner with the Minnesota Super Bowl Host Committee to ensure local fans are identified, including at the Super Bowl Experience in Minneapolis, just moments before the big game.