The NBA is growing in popularity, with the number of fans in the U.S. up 4% year over year, the largest increase of any major professional sport, according to Nielsen Sports Sponsorlink. With more attention to the sport, the value of exposure sponsors received during NBA game broadcasts in the 2017-18 regular season reached new heights, topping the $1 billion mark.

A combination of higher television ratings and new sponsorship patches on the jersey, has helped the league and team cumulative QI (Quality Index) Media Value for all of the sponsorship brands and locations grow 16% year over year, according to a recent Sport24 analysis.

Insurance led all sponsorship categories for the value of exposure received. And State Farm was the sponsor brand receiving the most value overall. In addition to an official leaguewide sponsorship, State Farm appears on the basket stanchion for 80% of the teams.

Branding on the basketball court surface, often utilized by arena naming rights partners, provided sponsors with the highest value of exposure, followed by the pole pad.

New this season, the jersey patch ranked seventh among team-owned sponsorship assets and provided $30.9 million in QI Media Value through the regular season, with just 20 of the 30 teams in the league using that sponsorship location. As explained in the Year in Sports Media Report, initials and icons performed best on the jersey patch location given the fast pace of the game and distant camera angles.

Brands see the value of associating with one of the most popular sports in the U.S., with sponsorship engagement up slightly year over year. Eighty-five percent of NBA fans say they are likely to consider a brand that sponsors a sport, and 76% say they are loyal to brands that sponsor a sport they follow. And, 61% of NBA fans say they have engaged with a sponsor while watching a game. That engagement includes buying the brand, checking out the company’s website and following the brand on social media. 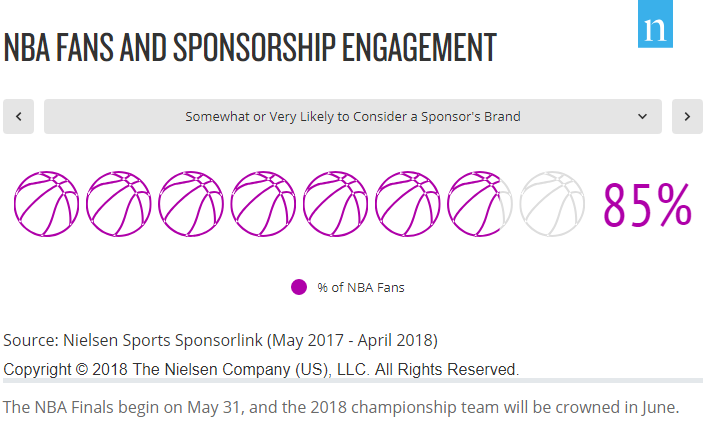