How To Launch A Podcast: An Intro For Radio

A majority of radio listeners surveyed by Jacobs Media for its TechSurvey 2018 said they listen to podcasts—including 11% who said they listen daily and 12% who listen at least once a week. It means nearly a quarter of radio’s listeners are consuming on-demand audio weekly or even more often. “That’s a number we have seen slowly but steadily increase over the years,” Jacobs Media digital dot connector Seth Resler said. It’s why he said the consultancy believes podcasting is the next big thing in audio. “Just like you’re seeing on-demand video content take over the world of television, we think on-demand audio growth trends are going to continue in the future for broadcasters,” he said. 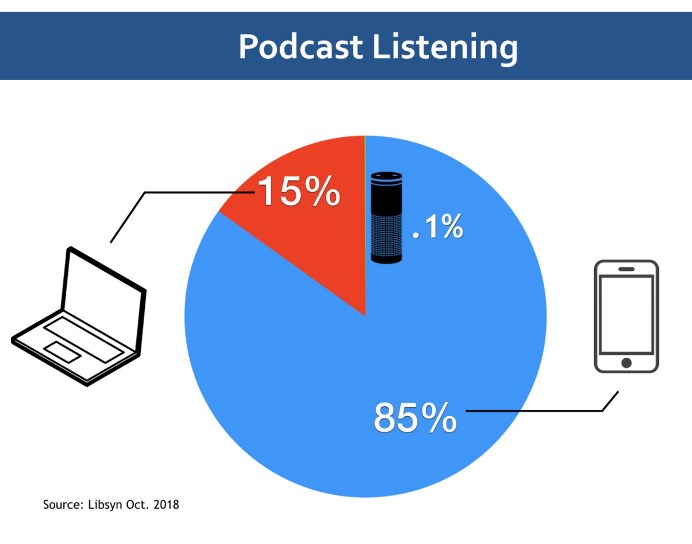 That growth is why more radio stations are looking to create podcasts that go beyond simple time-shifted versions of over-the-air shows. Speaking on a webinar last week, Resler said it will require some adjustment from the way broadcasters have been trained. “With radio we are trying to attract the largest audience we can so we aim for mass appeal topics. In podcasts we go after niche audiences,” he explained. Here’s what else is different: So with that as a starting point, Resler offered some advice for how radio stations should approach podcasting—

The biggest name at the station may not be the right person to a launch the podcast, according to Resler. “I would be inclined to take the people who are in the building who are most passionate and most interested and have them do a podcast. At this point the stakes are still relatively low. You don’t have a podcast line in sales goals and there’s not a lot of pressure to make sure it’s a big hit.” That could mean tapping someone outside drive time or even an intern. “Whoever is most passionate about it, who gets it, and who is most excited about it,” Resler said. “I would let them run with it. I think it’s an easy way for you as a broadcaster and a radio station to dip your toe into the water.”

The list of potential show topics is long, including sports, parenting, food, pets, movie, technology, fashion, TV shows, video games, travel and music. “The one thing that you will see about these different podcast genres is they all cover a very specific niche. This is a key difference between podcast and radio shows,” Resler said. That takes a bit of an adjustment for some broadcasters who are used to a few dozen AM/FM competitors where personalities attract an audience. “It’s different in a podcast,” he said. “When you have over 600,000 podcasts, the way people find a podcast is they look up a topic first and the personality becomes secondary. That’s why it’s really important to zero-in on a very specific niche with a podcast. That will typically perform better.”

Resler said a podcast called “The Spiky Fruit” may sound like a cool title, but anyone looking for recipes using pineapple would never find the show. With more than 600,000 podcasts, he said it’s important that the show’s title and author offer some description or clue to what it’s about. That’s even more critical since Apple, where a majority of podcasts are consumed, only indexes shows by title and author—not the description. Resler also warns about stuffing too many key words into a show’s title. Apple has begun removing podcasts that it feels have over-stuffed titles.

Podcasts like “This American Life” or “Wait, Wait, Don’t Tell Me” may sound easy to produce, but Resler said they’re tougher to create than may appear. Each has lots of moving parts with big teams of people working on them. “I would give some thought to that and what resources you have and what’s easiest to do,” he said. The easiest format is a host interviewing someone by phone. Another possible format is an in-person interview, followed by a multi-host scenario similar to a radio morning show. Resler advised newcomers to pick from that list of three. “These are very manageable podcasts to do and then you can grow from there as you get better at that,” he said.

How long to make a podcast remains the unanswerable question. Some experts have put out some recommendations, but Resler pointed out there’s not much data to back up any of the claims. “If you’re going to put out a daily podcast I would look at something short- 5, 10 or 15 minutes,” he said. Even more important is the first few minutes of the show. “The biggest mistake I hear from novice podcasters is that they spent the first 10 minutes of their podcast meandering around and they don’t get straight down to the business,” Resler said. “In a podcast you always want to get straight to the meat of the episode.”

That first season may not be a first season at all, if Resler’s recommendation is followed. He suggests anyone launching a show make the first release a pilot season. “Come out and do a finite number of episodes and see how it goes. If it goes well, go back for season two. And if it’s a failure and no one listens to it, drop it and launch something else. And if it’s somewhere in between, then tweak and pivot.” He said a pilot season creates a natural point to stop and reflect on what’s working.

Word of mouth marketing may help a podcast find an audience, but Resler thinks the best way to spread the news is for a podcast to tap into a preexisting audience. That’s perfect for broadcasters. “Radio is well-positioned to launch a podcast and build an audience for it by leveraging its existing fan base,” he said. Not only does it have on-air promos, but social media and email lists to leverage.

As a new medium for most radio stations with few expectations, Resler suggests heading into podcasting with some goals in mind. In terms of downloads, the podcast platform Libsyn said the typical show it hosts had 1,491 downloads (adjusted) in Nov.-Dec. 2018. He also points out that the typical advertisers wants about 5,000 downloads in a show’s first month before it has any interest in placing a buy. Fewer than 8% of podcasts on Libsyn hit that number, Resler added.

When launching a first podcast, it can be difficult not to become too attached to the show. But Resler said broadcasters approaching the medium need to think of their radio station as a Hollywood studio, not a specific film. “Studios are set up to produce many films. Some will be huge hits, some will be flops and a lot of them will be in between. But they are set up so they are not banking all their money on one picture and if that one picture doesn’t work they’re wiped out. They can pivot. I would do the same thing with your radio station.”

CREDIT to INSIDE RADIO