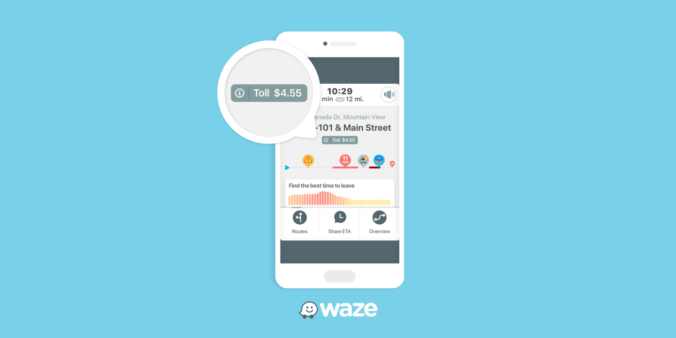 Waze will show you toll prices along your driving route

Waze  is making getting to where you’re going even easier – or at least more transparent. A new feature rolling out today will show you any tolls along your route, including the actual amount you’re going to pay, across both the U.S. and Canada.

This is above and beyond what you’ll get in most navigation apps, where you might get a visual or text indicator that there is a toll on one of the roads in your path (and you can opt to avoid them if possible) but you won’t know what you’re actually paying. With Waze, you’ll get the amount – sourced from its community of user drivers, rather than direct from the official toll road operators, however, but Waze’s crowd-sourced navigation data often has a leg up on the official source in other cases.

Waze will show you the toll prices up front, too, before the navigation actually gets under way, which is great because that’s when you actually have the opportunity to do something about it, whether it’s scrounging seat cushion change or just choosing to drive a different way.

This will be rolling out beginning today in the U.S. or Canada.

How to shop for a smart sprinkler controller…