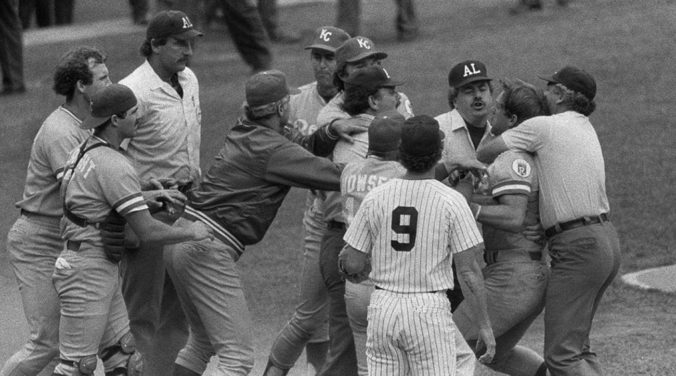 The Pine Tar Game was a controversial incident during an American League game played between the Kansas City Royals and New York Yankees on July 24, 1983 at Yankee Stadium in New York City. With his team trailing 4–3 in the top half of the ninth inning, with two outs, George Brett of the Royals hit a 2-run home run off Yankees relief pitcher Rich “Goose” Gossage to give his team the lead. However, Yankees manager Billy Martin, who had noticed a large amount of pine tar on Brett’s bat, requested that the umpires inspect his bat. The umpires ruled that the amount of pine tar on the bat exceeded the amount allowed by rule, nullified Brett’s home run, and called him out. As Brett was the third out in the ninth inning with the home team in the lead, the game ended with a Yankees win.The Royals protested the game, and American League president Lee MacPhail upheld their protest and ordered that the game be restarted from the point of Brett’s home run. The game was restarted on August 18 and officially ended with the Royals winning 5–4.

Tips To Keep Kids Safe While Having Fun At The Playground

Slack is rolling out a desktop update for a ‘snappier’ performance