How Americans Spend Their Audio Time On Smart Speakers

AM/FM radio is the second most used audio source listened to by Americans on their smart speakers, according to The Smart Audio Report 2022 from NPR and Edison Research. A research snippet released Wednesday from the forthcoming report shows AM/FM captures 13% of time spent listening to audio on smart speakers by persons aged 13+. That puts it ahead of YouTube and SiriusXM (each with 11%), owned music and podcasts (8% apiece) and audiobooks (7%). The dominant audio source listened to on smart speakers is streaming audio, which captures a 41% share.

Streaming audio includes pureplays, such as Pandora, Spotify and others. The YouTube percentage reflects time spent with music and music videos only. 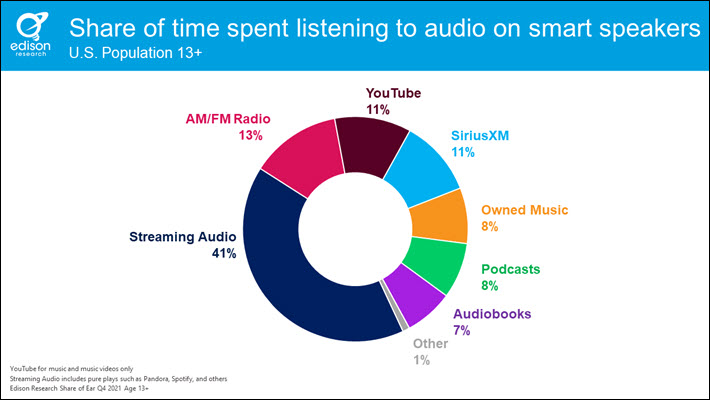 For the 2022 installment of the Smart Audio Report, Edison revisited the homes of smart speaker owners it first entered in 2017 for the inaugural report. “Five years later, we revisited some of those same families to see how they have grown and how their usage of voice assistant technology has changed,” Lazovick says. “In addition to an update on some of those original families, the new report will also offer fresh data from a recent national study that measures attitudes around voice tech among those who use it and those who don’t.”

The Smart Audio Report is derived from a national quantitative survey and analysis of in-depth, one-on-one interviews. It also includes tracking data from Edison Research’s Share of Ear study, measuring the daily listening habits of Americans using a 24-hour diary.