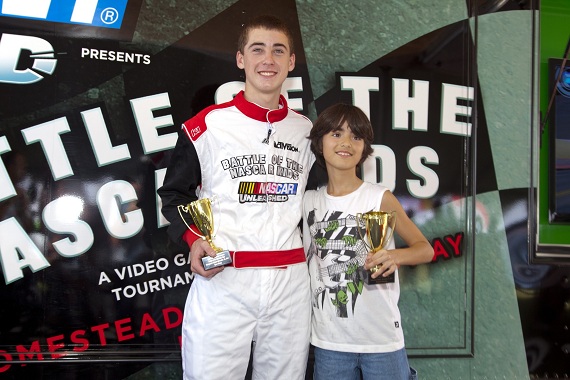 THE “BATTLE OF THE NASCAR® KIDS” TOURNAMENT GOES TO

The Winner is Crowned as NASCAR Families Played Activision’s

Homestead-Miami, FL – Activision Publishing, Inc. is proud to announce Ryan Blaney as the winner of the first ever NASCAR Unleashed “Battle of the NASCAR® Kids” championship. The tournament, which raised $50,000 for charities, took place at the Homestead-Miami Speedway on Saturday, November 19 and saw none other than NASCAR driver David Blaney’s son, Ryan Blaney, take home the trophy and $5,000 for the Alzheimer Association.

Utilizing the NASCAR Unleashed videogame, Activision took the storied rivalries and competitive NASCAR spirit off the track and put it into the hands of NASCAR kids, who competed against one another for pride and glory. With their moms and dads in their corner, the kids fought for first place and the honor of being crowned the first ever “Battle of the NASCAR Kids” champion. The event aimed to bring together NASCAR families and ultimately raise money for a variety of charities. All of the racers banded together to hand a check from Activision to The NASCAR Foundation for $25,000 and each participating family received $5,000 for a charity of their choice.

The following is a list of the players who competed and the drivers and charities they represented:

It was an incredibly close finish, with Ryan Blaney lagging behind for the first two of three laps against the stunning wild card opponent. In a miraculous twist of fate Blaney pulled ahead on the third lap to clinch the victory, but not before the wild card had a chance to turn the competition into a true nail-biter. All in all it was an incredibly rewarding day for NASCAR families and fans with Ryan Blaney being crowned “Battle of the NASCAR Kids” champion.

NASCAR® Unleashed is the next game-changing installment in NASCAR videogames with a frenetic and arcade style that maintains the principle feel of NASCAR racing. With phenomenal speed and pulse pounding gameplay, break out of the oval and onto the pavement of city streets, country roads, and sandy beachfronts! NASCAR Unleashed is available now for Xbox 360® video game and entertainment system from Microsoft, PlayStation®3 computer entertainment system, the Wii™ system from Nintendo and the Nintendo 3DS™ hand-held system at $39.99. For more please visit www.ActivisionUnleashed.com.