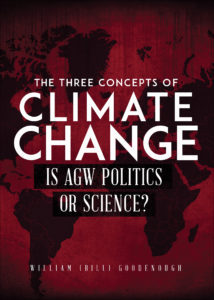 A new book from scientist William Goodenough, “The Three Concepts of Climate Change: Is AGW Politics or Science?” (www.whyclimatechange.net), challenges the conventional thinking of what’s driving changes in our climate cycle.

We’re used to the debate going in circles. As we notice long-term changes in the climate, alarmists want to attribute blame on humankind’s activities, yielding a belief that if we only change our lives we can change the weather. In response, skeptics point out that change is part of the definition of climate.

“You have many who want to completely alter our economy and lifestyle – but it’s all on a misguided belief,” says Goodenough, who agrees the planet is in a natural warming cycle, but suggests a shift in Earth’s magnetic poles is a primary cause of climate change.

“Most people do not have the time or interest required to separate politically motivated news stories from honest science.”

In “The Three Concepts of Climate Change,” Goodenough provides readers with the results of a 12-year study.

The first concept is a summary of the results of climate change studies by the international science community. The second concept is an assessment of the short-term, limited studies and political pressures that have resulted in premature and questionable conclusions.
The third concept identifies a phenomenon that is the most likely cause of today’s erratic and changing climate.

Earth’s magnetic poles are relocating by 3,000 miles. This shift is having a significant impact, realized in computerized aircraft-control navigational systems, and Goodenough argues that’s a clue it’s likely affecting Earth’s climate, too.

The magnetic pole alters the direction of the enormous current flow through the Earth, causing magnetic chaos in our planet’s core. This weakens the magnetic shield that protects the planet from damaging solar particles. Pole shifting changes the direction of the interaction between the geophysical and the magnetic North Poles by moving the coldest area of the Arctic toward Asia, thereby significantly altering the climate while not changing total Earth temperature.

“A multi-disciplined approach is necessary to understanding climate change, including meteorology, climatology, geophysics, geomagnetism, archaeology, paleoclimatology and history,” Goodenough says. “For most, it’s much easier to just keep swallowing what they’re spoon-fed in media, but I hope to reach those people who are at all skeptical of the prevailing theory; a theory that has proven itself to be false.”

William Goodenough is author of “The Three Concepts of Climate Change: Is AGW Politics or Science?” (www.whyclimatechange.net). He is a technical analyst with decades of experience in scientific analysis of computer systems, control systems, pneumatic systems, power distributions systems, automated processes, hydraulic systems and fuel systems related to aerospace certification.