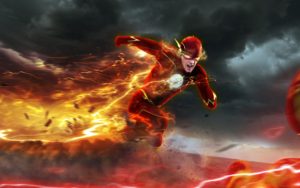 You’ve heard it time and time again over the past six months — ever since “Batman v. Superman” stampeded through theaters, destroying childhoods with convoluted storylines aimed to make our favorite caped crusaders fight each other instead of the bad guys —  but The CW is where comic book fans need to be right now. Ezra Miller’s brief screen time in the aforementioned abomination was topped by his presence in the “Justice League” trailer, but that suit illustrates everything wrong with the D.C. film team’s vision for the lightning fast hero — Why does it look so chunky? — and destroyed what little hope we had for his big screen adventure. Stick with Grant Gustin’s sleek and smart interpretation of the speedster, and you’ll be happy.

Last Season’s Best Episode:  “Parallel Earths” may not be a term you’d expect to encounter in a superhero show on The CW. Sure, the network has debuted some loopy, goofy garbage, but that’s just it — the more absurd the premise, the worse the show gets. “The Flash” uniquely subverts these expectations with “Welcome to Earth 2” and “Escape From Earth 2” — a two-part episode that’s describing a second earth, not labeling the episode as a sequel to “Welcome to Earth” and “Escape From Earth.” Anyway, it’s a bit confusing, but quite enjoyable.

What’s going to happen w/this season’s Flashpoint arch? That really remains to be seen, however if you’re a Verizon FIOS customer – have no fear the mobile app is here.  Regardless, whether viewing your show via the mobile app or just scheduling it — you’re a step ahead of everyone else.

I’m so glad that I made the switch to Verizon Fios because BetterMatters!!!

Disclosure: This is a sponsored post as a part of a campaign I’m doing with Verizon FiOS in New York.