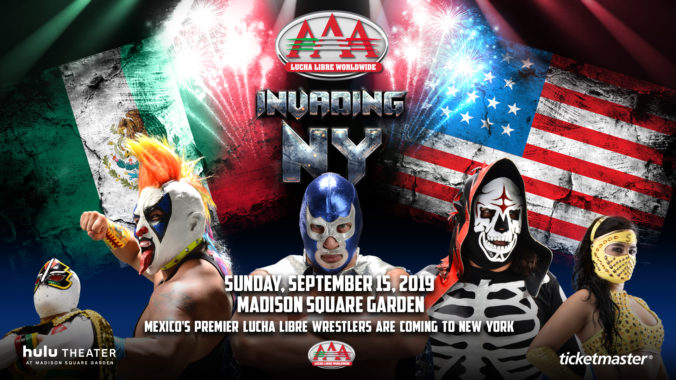 The world’s premier Mexican pro wrestling organization, Lucha Libre AAA, announced today that it has engaged IMPACT Wrestling, a subsidiary of Anthem Sports & Entertainment, to promote the LUCHA INAVDES NY event to be held in the Hulu Theater at Madison Square Garden on the eve of Mexican Independence Day, Sunday, Sept. 15, at 6:00 p.m. ET.

LUCHA INVADES NY will feature an impressive roster of leading Mexican and internationally-known Luchadores providing fans an intimate opportunity to experience the colorful aspect of the wrestlers’ unique masks and outfits, as well as the dramatic, high-flying matches inside the ring.

“IMPACT Wrestling and Lucha Libre AAA have been strong partners for many years and this event marks a significant milestone in our collaboration to bring fans dream matches featuring the best international talent from both organizations,” said Ed Nordholm, Chief Corporate Officer of Anthem Sports & Entertainment and president of IMPACT Wrestling. “For over 50 years, Madison Square Garden has hosted some of the biggest events in the world. It is an honor to team up with Lucha Libre AAA for this monumental show to present the best of Mexican professional wrestling in this legendary venue.”

“We are thrilled to bring the most popular Lucha Libre legends to fans in the Hulu Theater at MSG,” said Dorian Roldán, Director General of Lucha Libre AAA. “The Hulu Theater seating offers our fans the kind of exciting, personal experience they expect from AAA.”

Tickets are now on sale and may be purchased at the box offices or online in Spanish or English at www.luchalibreaaausa.com, or at www.ticketmaster.com, orwww.msg.com.

How to watch the #SticksAndStones hidden epilogue

Protecting Yourself and Your Stuff While on Vacation