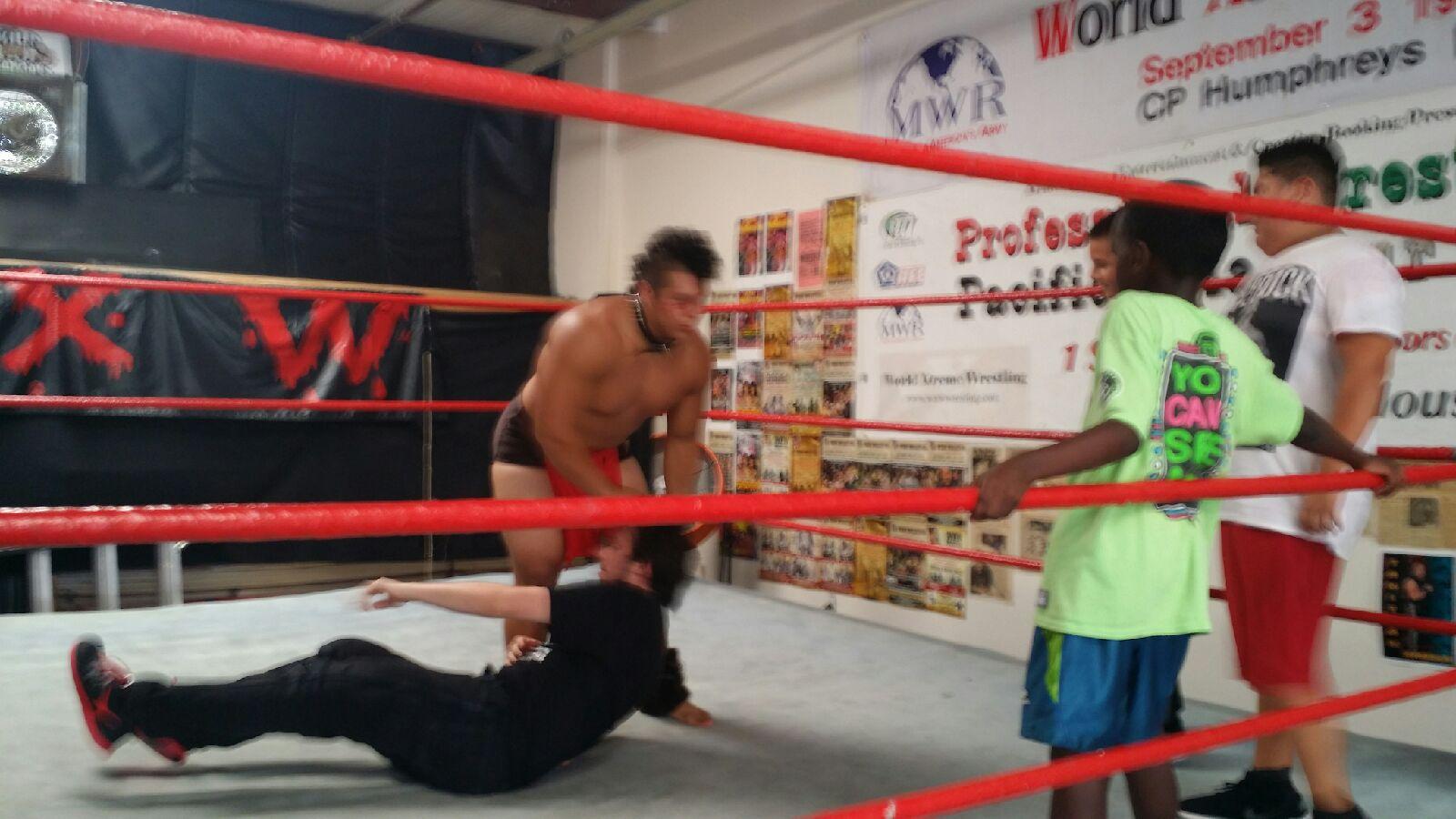 Here are the best things about being a parent:

This week, I was able to do all of the above for my son.

I’m a dad of two beautiful children, my 2 year old daughter (Apple) and my 9 year old son. (Josiah) My son and I have a growing bond when it comes to wrestling. Not the Olympic kind (nothing against it all), but the ones that allow for chairs to be used, being able to jump off top rope and on someone and most importantly to my son have “shocking moments” as he always says. After months of calling and waiting, I was able to enroll my son in the Wild Samoan Pro-Wrestling Training Center’s camp for children. The owner and founder, Afa (Yes, the same one who was one half of the WWE Tag Team The Wild Samoans and 2007 Inductee in the WWE Hall of Fame) started this program to help expose the sport to children at a young age and allows children the ability to live out their dreams that they get to watch every week when they turn on the TV. The WWE has a disclaimer that says don’t try this at home, well my son had a place where he can try it with great instructors and a family feel surrounding the place.

My wife and I enrolled Josiah in this program and we counted down the days with excitement until he could attend camp. Josiah was so excited because he barely wait to perform some of the wrestling moves – he’s watched on TV  – since we started watching wrestling together two years ago. Josiah’s 8th birthday was a WWE theme – equipped with cake, and party favors. Josiah’s toy chest is filled with all types of wrestling toys and video games and the complete encyclopedia to help him learn the history of all of his WWE favorite past / present characters.  Every month, we watch all of the Pay per Views with our subscription to the WWE Network.  We try to attend  as many live events in the Orlando area when the WWE is scheduled to be in town. The camp was a culmination of two years of WWE/professional wrestling  in a four day camp. My wife handled the camp’s initial three days, I decided to take off from work on the final day of camp.  The fourth day happened to be Josiah’s 9th birthday.  We had a great final day of camp – which consisted of a four hour session that I would never forget.  After stretching and getting warmed up, all the children took pictures (the last day was costume day) while in the ring.

Everyone was in full costume:

The children went through a series of matches, including singles (one vs one), tag team matches and even a royal rumble. Each child was allowed to win at least once so they can have that feeling of getting their hand raised. The camp includes actual wrestlers that have hopes of making it to one of the wrestling promotions across the world.  This environment affords it’s instructors and students (children too)  a personalized approach to better understand the training. The children even had to recite the same pledge that the adult students has to memorize as they progress with their training.

After a day of matches, Afa visited the site and individually spoke to each child and also as a group.  Afa is a man of few words, but easily commanded their attention.  Afa wants the camp to flourish and has a complete love to teaching and further develop all aspects of wrestling. Lynn was outstanding in her treatment of the children and extremely knowledgable of the wrestling business.  Lynn and her staff ensured that everyone felt comfortable and also that every match felt like Wrestlemania.

This camp was an enriching experience for my son and something he’ll remember a very long time.   I’m unsure of how I’ll top next year’s gift. and for his father’s gift.  So, if you’re in the Central Florida area, or plan on taking a vacation out to sunshine state and you want to make your child’s wrestling dream come true, you can do so by attending this camp.  I promise it’s an experience that you and your child won’t forget.  If you don’t believe me stop by their Facebook page and they have a photo diary from each day of the camp.

How Much Flying Time Is Enough?