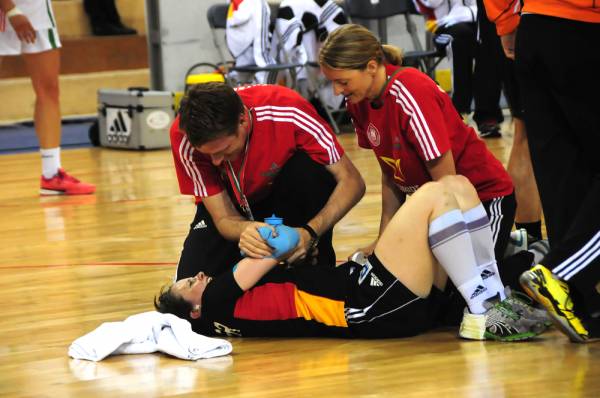 Many men cultivate a tough-guy, weekend-warrior image, pushing their bodies to the limit with an active lifestyle, and then reaching for an ice pack and a couple of ibuprofen tablets by bedtime.

But it turns out women are no slouch in the weekend-warrior department – or in racking up injuries to limp home with.

“A lot of people might be surprised to learn that women are even more likely than men to suffer many of the most common sports injuries,” says Dr. Ronald Shapiro, medical director of Physicians Technology LLC and co-inventor of the Willow Curve (www.willowcurve.com), a low-level smart laser that treats joint pain.

Those injuries can include ankle sprains, shoulder troubles and knee problems, Shapiro says.

“It seems that people are more active than ever in sports and other activities, so our joints wear out sooner in life,” he says. “And, as has been documented, this can have an even greater impact on women.”

Why is that? Members of the medical community who have pondered the question have come up with a few reasons. Those include:

• Women have higher levels of estrogen, which can lead to ligament injuries. They also have less muscle mass and more body fat than men.
• They have greater flexibility because their ligaments are looser. In addition, their muscles are less powerful.
• Their wider pelvises alter the alignment of the knee and ankle.

“It’s great to be active,” Shapiro says. “But anyone who’s suffered from tennis elbow or sore knees knows that it’s no fun to finish the day in pain.”

Even what people would consider “safe” sports can end up placing extraordinary stress on joints, he says. For example, a recent medical report revealed a golf swing can place as much as 4.5 times your weight in force on your front-knee joint. That’s 675 pounds for an individual of 150 pounds.

“Imagine how much more stress the really aggressive sports can place on our joints,” Shapiro says. “That stress takes a real toll over time.”

Often joint injuries are treated with what health professionals refer to as RICE (rest, ice, compression, elevation), which can help ease pain and reduce swelling.

Many people also use over-the-counter pain medication, and if the pain persists they might turn to a doctor for prescription medication and in some cases surgery.

More recently, technology is emerging as an alternative option for temporarily relieving pain.

Shapiro has been involved in that research and, as a leader in the growing field of technaceuticals, co-invented with David B. Sutton the Willow Curve, which is one example of how technology designed for the home can work to temporarily ease chronic pain. Because it’s also a smart computer, the device assesses the condition of the joint and delivers a targeted digital treatment.

“Digital-therapeutic technology holds great opportunity to improve the quality of life for weekend warriors, both women and men, who have put their bodies to the test,” Shapiro says, “and also for anyone with chronic joint pain.”