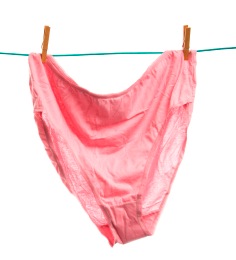 Co-Parenting With A Side of Magic Panties

One of the hardest things I’ve had to deal with as a single mom is co-parenting. If you’re unfamiliar with the term because you are a happily (or not so happily) married parent, don’t have kids, or live in a world full of rainbows and fluffy kittens, I’ll fill you in on the details.

Co-parenting is basically when two parents no longer live together, but still have equal responsibility of a child’s upbringing. Or as I like to call it: “Poor me I have to deal with this douchecanoe for the rest of my life, never knowing what to expect or whose underwear I might find while in his presence, so pass me a cocktail or twelve.”

When my son’s father and I split two years ago, I agreed to joint custody.  I hated him at the time and knew that dealing with him on a regular basis wouldn’t be easy for me, but I also knew that custody was not about me; it was about what was best for our son and if his father wanted to remain in his life there was no way I would hinder his efforts.

In the beginning we kept our distance from one another. I was still hurting from the loss of my family and the fact that my ex fell out of love with me, met a much younger version of me, cheated on me, and then left me, so for the first few months after our separation I chose not to face him. Instead I had my mother hand Aidan off whenever it was time for his Dad to pick him up or drop him off on Mondays and Thursdays. We had limited contact unless it was through text message and I liked it that way. So did my heart.

My son, however, did not. He would often throw tantrums at pick up or drop off. There was even a time he literally clung to his father, screaming and writhing as he begged him not to go. While I watched from the kitchen window as my mother pried him off and tears streamed down his face, I quickly realized while this was what was right for me it was not what was right for my son.

You see I am a child of divorce myself. I remember what it was like growing up as I was tossed from one parent to the other every two weeks. I recall how awkward it always was when my parents had to interact with one another at school events, birthday parties, or any other time they were forced to come face to face. I always felt uncomfortable, thinking I had to choose one side or the other if I was to remain loyal to either of them.

I didn’t want my child to feel that way, so I made a decision to forgive and try to have some sort of relationship with my ex that would be more conducive to co-parenting. I wanted to show my son that we were somehow still a family, albeit untraditional. Even if we were no longer “together” I felt it was what my son needed to thrive.

It wasn’t easy, but after weeks of taking baby steps we finally got to a point where we could sit and talk civilly without me wanting to kick him in the junk.  Eventually that civility turned into a friendship and we were able to do things together as a family of three, just like it used to be.

The only problem with that was that after about a year my ex mistook my forgiveness, willingness to co-parent, and friendship, as a desire to rekindle a romance. I won’t say the thought didn’t cross my mind. Parenting alone isn’t easy on me or my child. I also won’t say that we didn’t try, because eventually we did, but ultimately I realized he still wasn’t the right man for me.

Recently I went to my ex’s house to watch our son. His father was going to a baseball game and asked if I could watch Aidan. Of course I jumped at the chance to have some extra time with my boy. As per our custody arrangement our son spends Monday-Wednesday with his father and Thursday-Sunday with me, so in an effort to keep this routine I agreed to watch Aidan there instead of at my place.

The three of us went grocery shopping before he left since there wasn’t much in the house to eat. Once we got home I started helping my ex unload the car and bring in the bags. On my final trip from the car to the house I noticed a shiny piece of cloth in his trunk. As I picked it up to inspect it I realized it was a pair of women’s underwear, at which point I began to seethe.

2-     How old are we that we keep the underwear of the chicks we bang in our trunk?

4-     You tried to prove to me for the last six months that you’ve changed and were worthy of me and a second chance, yet you’re screwing other women and leaving their panties around for me, OR OUR SON, to find?

Surprisingly I kept my cool, did not murder him, bury his body in the backyard, and flee the country, but I did confront him the first chance I had, at which point he proclaimed he had no idea where the underwear came from.

The moral of this story is co-parenting is never easy. How will I handle the next few pick-ups and drop-offs? Even I don’t know. One thing I do know is that I’m a damn good mother for dealing with my panty hoarding ex for our son.

I also know some woman out there is missing a pair of magic panties.

Is There A Magic Spell for Kid Fears?